Finding an interesting hashtag on Twitter is usually a short term piece of fun (e.g #MedwayFilms: Naked Gun Wharf;  Nightmare on Elm Court etc). However, the #urbanfringe hashtag not only introduced me to artists Jo Roberts and Stephen Turner (interviewed here) but offered the opportunity to attend the Urban Fringe seminar and find out more about the project overall.

Since I’ve covered Jo and Stephen’s personal journeys already, my focus during the event, held at UCA Rochester, was on the film Recorded Delivery, and the thoughts behind it of makers Simon Barker and Nayan Kulkarni, the other artists commissioned by the Kent Architecture Centre for the project.

The split screen narrative drew together two very different communities within a short distance of one another: Medway Gate, a fairly new housing development which ‘ticked all the boxes’ for new developments, and the Medway Bridge Marina – which, incidentally, I also recently visited – an established boat yard, in which local business owner, John Reynolds, opened up a cafe and social space. 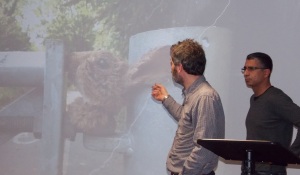 Exploring the area, Simon and Nayan encountered the urban mythologies of the space: rabbit heads adorn gateways at the entrance to Medway Bridge, underpinned by stories of white witches and lost children. The film followed the journey of a trolley, laden with a guitar, from Medway Gate to the marina, where the music loving community used it to share their songs. Simon and Nayan ingratiated themselves sufficiently to be invited to film the community at play (their Halloween party) with the film makers largely ignored but sometimes posed for.

Sadly, the Medway Gate community was harder to crack, since the artists were unable to meet many of them – short of knocking on doors (not desirable) very few hung around the streets. Simon advised: “Residents complained because the developers never built the social spaces that they promised.” He and Nayan would love to replace the trolley with a boat they build in the marina – relational architecture – which they can drag to Medway Gate instead and use it to create the missing social space. Simon lamented that the inhabitants have to drive out of the area just to buy paracetamol, or a Sunday paper – a boat in situ could provide that. The first connection between the marina and Medway Gate would be firmly established, and a re-shoot of Recorded Delivery undertaken. 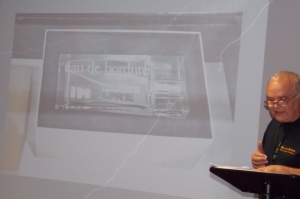 Stephen’s ‘Environmental Solutions’ – the fragrant waters and essential oils of Eau de Bordure (Eau de Fringe) – have their own brand: Janus, the god who faces two ways, showing the interaction between human kind and nature, which took on a pertinent edge when he quoted housing minister, Nick Boles: “We’re going to protect the greenbelt but … sometimes buildings are better”. This Jo reinforced with a discussion about whether the urban fringes and greenbelt have to be pretty to be valuable. Ominously, on that evening’s Newsnight, Boles said there’s a “huge amount of room to build houses over England.” Does he mean brownfield sites, or is he suggesting concreting England’s green and pleasant land?

Introduced by KAC’s Chris Lamb, the seminar provided a discussion board for on how to develop living space. He quoted renowned architect, Sir Terry Farrell, who said “the place is the client” in development and planning. “It’s drawing out the DNA of a place” continued Chris. “If people understand what’s unique about places where they live then they may engage more with the planning process.”

Ultimately, a space depends on its people belonging to the community. In the case of Medway Bridge Marina, the community was already there; the social space developed because of them. Just building a social space in a new housing development is unlikely to work. You need a catalyst, a resident ‘doer’ who’ll organise and cajole their neighbours to do stuff. (Think of those neighbours without whom no street parties would’ve taken place this year.) And that takes time the planners and developers seem unable to allow for – unless, do that many new developments need building? Aren’t there enough boarded up streets in England, just waiting to be reclaimed? Shouldn’t those existing spaces with established communities be renovated and restored first?

Vandalism and anti-social behaviour in those places can be tackled – we’ve community doers in Medway actioning change right now, with the help of schemes like Big Local. If new developments are to take place, we can only hope the planners do as the Urban Fringe project suggests: See the area, feel the area, engage the existing communities within its borders and shape it to fit.

To read the best of what’s happening in arts, culture, architecture and more nationally, the BBC’s The Culture Show link is here.

One thought on “Discussions on the Urban Fringe”