Instigated in America in 2007, and soon followed by the UK, Record Store Day is a celebration of independent record shops, featuring artists and bands in live performances, and lots of special releases. And our local record store taking part is Manny’s Music, in Chatham High Street. 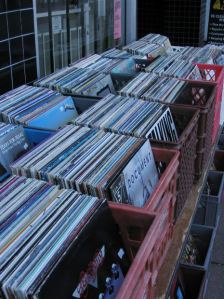 The fellow music fans who work in independent record stores are so different to the chains – they get to know you, your taste. They see you coming and are pulling stuff off the racks and onto the decks ready for you, with a carrier bag to hand.

I spent most of my Saturday afternoons in a lovely little place called City Sounds, in Holborn, (where I once debated for about four hours whether to pay £25 for a cut out of A Touch of Class’s  I Love You Pretty Baby – I didn’t have the guts) and where Nigel and Dave would see me coming: Most of my salary went on vinyl. To be fair, I did use to also frequent Sounds Right in Poplar. Where’d they’d also see me coming and be waving covers at me as I entered …

The collection is now stored in the loft, awaiting the day I buy a turntable so I can dig it out, spread it all over the floor, catalogue it all (again, obviously. I’d done that once, back in the day. But who knows where that notebook is any more …) play it, reminisce about a bygone age of Caister Soul Weekends and the Swan and Sugarloaf, and then magically get it all on some device or other so I can store it all away again safely.

There are about 3000 pieces in my collection, a mix of albums, 7″s and 12″s and while most are r&b, jazz and soul, some are electro pop stuff which I was sooooo into at the time but can now, frankly, go.

I’ve often mentioned in passing to Manny, in his music store in Chatham, that I’ll bring them along to him, but here we are again, with Record Store Day this Easter Weekend, and I’m still no closer to owning that turntable.

So, I’m sorry to disappoint you, but you won’t be able to shuffle through my discarded Classix Nouveau, A Flock of Seagulls and Blancmange  vinyl on Saturday. However, Manny has plenty of stock without my rejects cluttering up his shop, so get yourself along there and have a good ol’ rummage.

To find out more about Manny, here’s an article I prepared earlier – when he first took over the store 🙂

2 thoughts on “The Day of the Vinyl Junkies”