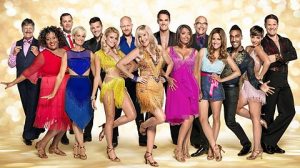 … and watch out for the B word.

But back to my original reason for coming here. OLA!!! Steve can dance – just because he can throw throw you from one side of the dance floor to the other doesn’t mean we didn’t want to see those amazing Charleston moves again that we saw so brilliantly in the quickstep, and all too little of, in this Charleston. Grrr – so frustrated last week, – that could have been the dance that netted them the undying devotion of a whole bunch of viewers, just like it did for Team Cola. Such a missed opportunity 😦

It was the same disappointment I felt when Natalie walked out in a leotard with Ricky Whittle, and similar repulsion for Lisa and Brendan. As for the World Champion Show Dancers, well, I’d rather watch Scott and Joanne’s foxtrot again. Seriously – I agreed with Len, re the dance off – Scott’s foxtrot was much cleaner than Alison’s, and the whole routine was a pretty decent effort, considering where he’d come from.

Frankie and Kevin stormed the dance floor again with their tango – such an emotional song and they danced it perfectly, she’s become a strong favourite for me. Mark and Karen have brought themselves right into contention – and the training footage for tonight looks to cement that position.

Caroline is still being Miss Consistent, Sunetra still has her lovely arms, I too noticed Jake’s flappy foot a couple of week’s ago, and Steve will hopefully put in a strong showing in the Paso – he needs a big dance. As I write this, Carmen’s Overture has just begun playing on the radio – a good omen, perhaps? Let’s hope so!

2 thoughts on “Tricky lifts and dancing”