Twitter boss, Dick Costolo, recently admitted that the company “sucks” when it comes to dealing with trolling and abuse through the popular platform.

A number of high profile users have left the site due to them being targeted by cowardly and/or sick individuals – who wouldn’t dare say what they do face to face.

Other users can get a little over excited with TV programmes, appearing to mix them up with real life. Witness the last couple of days with American cosmetology student, Bobbie Beale, receiving messages asking her why she killed her sister … *sighs* (#Eastenders)

Happily, on this occasion, little harm was done as Bobbie was soon enlightened and saw the funny side (although, her dog being called Lucy is a teensy bit spooky!).

I sometimes read cases though – often, where a conversation has continued – and wondered why the abuser wasn’t blocked. It occurred to me that the problem with Twitter and Facebook is that it’s not always obvious how to do so. So here’s my mini-guide on how to stop the trolls.

On Facebook, go to the profile of the person you want to block/unfriend. Click the three dots on the cover photo. In the drop down box, click on ‘Block’ and also ‘Report’ if desired.

Also on the cover photo, click on the ‘Friends’ button and select ‘Unfriend’ in the drop down box – blocking should also achieve this.

You can also change your privacy settings to friends or family only. Under the Privacy Check up (under the locked padlock) you can block someone using their email address on the ‘How do I stop someone from bothering me’ tab.

If you no longer want to be connected with someone, simply click on the ‘Following’ button to ‘Unfollow’. They can’t Direct Message you if you’re not following them.

If they’ve annoyed you enough, you can also block them completely and report them. I had to do this with s*x spammers who invaded the #BritishS*xPositions hashtag game (the key word was very much British and not s*x. E.g: The Centre Court) Once done, they immediately disappeared. You can block and report any tweet, whether following the user or not. 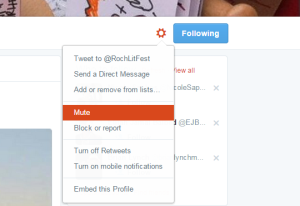 Finally, you’ve a lovely friend  you completely adore but who tweets their every move from “Morning all – first coffee of the day!” through to “On the train to/from work” to “Late night milky drink – night night!”. You don’t want to unfollow because they’re a nice enough person but they JUST DON’T SHUT UP EVER – you can ‘Mute’ them. They’ll never know.

Oh, and those promoted posts on both platforms, or annoying ‘Play This Stupid Game’ invitations? There’s a little cross embedded in them – click it and like magic, they disappear!