Nothing much unexpected happened – although I suspect Tom had a bit of a shock, since he had such a strong team.

First up was Team Ricky and Autumn. And no, I still don’t get why he was so fixated on her – powerful but lacking musically, in fact, she sounded dreadfully flat to me at times.  Emmanuel also, was not as impressive, the song did little to show him off. Stevie delivered though, easily the standout with a rockin’ and passionate song called All Through the Night. I’d never heard of it but Stevie made it sound familiar, if that makes sense. He rightly went through on the fast pass – although I’m sure the public would have put him through anyway.

Team Tom put on a fab showing, with Lara’s pure jazz infused vocal giving way to spoken word and then back again – it was my favourite performance of the night (apart from returning winner, Jermain, and his Motown-sounding offering How Will I Know – I was so relieved it wasn’t the Whitney song). Howard had plenty of energy and whipped up the audience, while Sasha’s emotions were channelled into a ballad with a thump. She cries really beautifully, it’s poetic the way her tears fall. She has a hold on Tom’s heart and gained the fast pass. 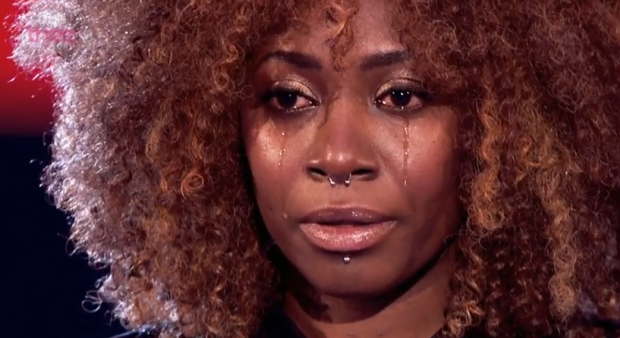 Sasha and her poetic tears

Youngest contestant Karis was out first for Team Rita, a good performance with a lot of energy. Clark’s take on Ain’t No Sunshine was good but overall the performance is too small for me. Joe – the one they keep touting as a sex symbol even though he’s only about 12 years old and DON’T YOU READ THE NEWS, MARVIN? EMMA? RITA? It’s cringeworthy and me and everyone in my timeline wants them to just stop it. He did well with Wake Me Up, showed a lot more power but I’m still not convinced. Probably because I’m nearer the menopause than puberty. Karis took the Fast Pass.

And then it was Team Will – whose team I’d neglected and was turning into the strongest. Sheena started well but then got a bit screechy – but it was still one of the stronger performances of the night. Lucy was always going to go through – we like different, and you know how well opera does in reality shows. There were a few goosebumps with her rendition of When You Wish Upon A Star. Ignore the opera/classical snobs – a beautiful singer singing a beautiful song is a beautiful thing. I was so looking forward to Vikesh, but jeez, there’s embracing the glamour and then there’s going way over the top with a Shirley Bassey impression. He doesn’t need to do that, he has an amazing voice and I really don’t want him to become the panto contestant. Lucy took Will’s fast pass.

It was then left to the public vote, with no safety net of another team member guaranteed a place.  I did throw a vote Emmanuel’s way, as there is such potential with his beautiful tone, and was glad he made it through. Unsurprised about Autumn and sad for Lara, but from the Twitter timeline you could see the spoken word didn’t do it for people. And Howard, although clearly with a lot of audience support, failed to make it through, leaving Tom with only Sasha into the semis. The little girl vote clearly worked for Joe, but it was Will left beaming at the end, as both Sheena and Vikesh joined Lucy.

Emmanuel and Stevie – all that’s left of Team Scatty

Keep up to date with all the gossip and news at the BBC The Voice website. The Semi Final  is on Saturday, March 29th at 7pm.